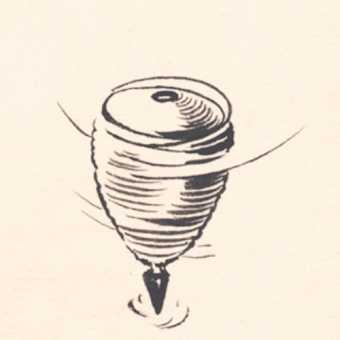 A lift takes the visitor to the top floor. The museum route goes from the top to the bottom floor and guides the visitor through a chronological and thematic overview of Magritte’s life and work.

The visit starts with Magritte’s Constructivist period and his contacts with the '7 Arts' group, followed by his discovery of de Chirico and the first Surrealist works. Themed showcases form part of the tour, displaying the wealth of Surrealist archives kept at the Museum. From the so-called historic magazines to the tracts and correspondence of Magritte, these archives highlight the artist's fellow travellers (E.L.T. Mesens, Paul Nougé, Camille Goemans and Louis Scutenaire) and the French Surrealists he knew during his stay in Paris (André Breton, Paul Eluard and Louis Aragon).

The next floor examines the artist's return to Brussels. Hit by the economic crisis of the Thirties, Magritte devoted himself to what he called his 'idiotic works', that is his work in advertising, which was crucial to his grasp of the concept of the image and its repetition.
This period was also marked by his closer links with the Communist Party of Belgium. Put in the dock by the Nazis, Magritte laid low during the Second World War, when he embarked on 'full sunlight' Surrealism, an Impressionist version of his painting. At the Liberation, he re-established his links with Paris in an ambiguous way by exhibiting the so-called 'vache' period series.

Finally, the last part of the Museum is entitled The Enchanted Domain and is dedicated to Magritte's research into repetition and to the large Magrittean images focused around The Dominion of Light and The Domain of Arnheim. The key works of the large collection of the Royal Museums of Fine Arts of Belgium are accompanied by loans kindly provided by private collectors.

The tour ends in a cinema, which shows films dedicated to the artist as well as some films that Magritte himself liked to watch with his friends and that inspired him in his work on the subversion of images.